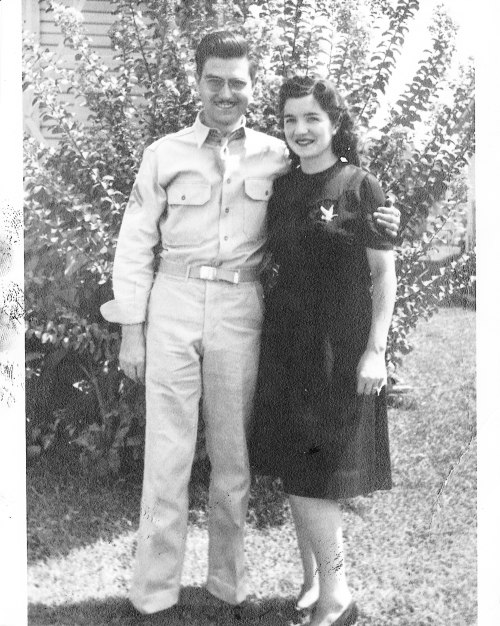 Nicholas Salvatore and Elizabeth Galloway. They lived inside with me for so long and on Monday I posted the last of their letters sent during World War II. All of which can be found here. Having met right before he went overseas, the letters are their courtship captured in their own words, which also meant they were presenting only part of themselves, as we all currently do on social media – some aspects idealized, some glossed over, some done simply for the expected emotional response.

But what happens when you fall in love with that simplified view of another person, with the story they present you because that is all you can know of them? You fill in the pieces with your desires. Nicholas and Elizabeth’s story doesn’t end with the end of the war and the end of the letters, it finally enters the real world and what do you do with the idealized version of your beloved then? When you have spent years talking about what you’d do together “after the war” and now that it’s here you’re not sure what to do?

Nicholas and Elizabeth come from a novel I wrote called Something to Live By, which I hope to publish in full some day. As a teaser, here’s the beginning of the next chapter of their life together.

He had long worried that she would never live up to the picture he had created in his mind. After all, he only knew what she had chosen to tell him and, given such an opportunity, we all leave out details that would put us in a bad light. She couldn’t be perfect, but he didn’t want her to be. And he didn’t want to know everything about her. He just hoped she felt the same towards him. Part of him never wanted to meet her in person again. Not ever. Maybe it would be better to walk away with the images they had created of each other. But then he thought of how she constantly surprised him. How she had exceeded any notion of a “perfect” girl that he could have imagined. Growing up he often fell asleep telling himself stories, with himself naturally the lead and always a pretty girl involved. Yet all of these idealized pictures of womanhood faded when he thought of her. She was real, full of passions and the unknown. She was afraid and bold and honest and secretive and loving and demanding and constantly searching. He could never have created her but if he hadn’t met her he would’ve always gone on trying.

No, he couldn’t be disappointed in meeting her. How could he? She was real and she was his.

In the last two hours she had had seven offers for drinks, five invitations for lunch, and two marriage proposals – all of which left her flattered but a little uncomfortable. Now, sitting alone at the small cafe near the dock she picked at the white peeling paint on the table and shook her head at how men could act over a little paint and powder.

She had her hair and makeup done this morning, and bought a new dress to boot. Everyone in the shop praised her looks, but knowing they were on commission she thought little of it. Out in the streets though she seemed to have fooled them. What they didn’t know was that under that powder were worry lines and dark circles beneath her eyes. She hadn’t slept all night and was worn out. Catching a glimpse of herself in the bathroom mirror she felt self-conscious, but there wasn’t time to change. She hoped he liked her like this, then reproached herself for worrying so much about what a man thought about how she looked.

Elizabeth began rooting through her purse for another cigarette but came up empty. She went to the machine and got another pack.

The light fog dissipated and there she stood – the Statue of Liberty. He imagined his grandparents seeing this image for the first time. His father’s young eyes, unaware of what he had left and what was to come, looking up at this gigantic woman welcoming him to his new home.

Nick drifted to Elizabeth’s last letter. Overwhelmed by anticipation, and the constant rolling of the sea, his breathing became unsteady, shallower; his heartbeat drove ever upwards.

The ship’s horn cut through the voices of the small crowds that had gathered about. She glanced up and saw it. It was beautiful. The majestic ship glided into port, the decks covered in green and khaki, cheering as one. She stubbed out her cigarette and walked towards the ship. Then she waited. By the time she had finished the rest of the pack the Queen Mary began giving up the first of her live cargo. She watched and waited, worrying that she’d never find him in the crowd.

She watched couples and families reunite. She watched little old ladies waving American flags to welcome home the boys. She watched women kiss soldiers they had never seen before and would never see again. Most of the troops were raucous, kissing every woman they saw, kissing the ground, whooping and hollering like children. Some however, were solemn, taking their time and making sure to acknowledge every window front, every streetlight, everything they had once known and taken for granted.

Her eyes followed one solider whose head was down. He dragged his legs, his uneven duffel bag making every step labored. She didn’t know how but she knew it was him. There was no doubt about it. She ran and threw her arms about his neck, knocking his hat off and nearly knocking him to the ground. His face was as green as his uniform.

“Elizabeth…you’re here. I…you’re here….” his voice trailed off as she led him to the side and sat him on a wooden piling.

“Oh my gosh you’re sick. Let me get you some water.”

She slipped away and came back with a large cup. He drank it in sips, pouring the last drops into his hands and massaging his face. He had regained some color. The front of his hair was now a mess, standing up all over.

“You feel any better?”

“Oh Elizabeth, I wanted so much for this to be like the movies. We’d run together and everyone would be watching, the music would swell and crescendo. But look at me. You waited two years and this is what you get. I’m sorry. And you, geez, you weren’t kidding – you look like a million dollars. My god. What happened to that kid I met? There’s not one ounce of her left. You look incredible.”

“Thanks,” she beamed. “I don’t care about any movie ending. All I wanted was you home safe. Did they give you any food on board? Ohh, are you up for eating? Or is there anything I can get you?”

“Lunch sounds great. I’ll be alright by the time we get food. Every time I get on a ship I get sick. They give you these pills but they don’t do a damn thing for me.” He stopped himself and stood up. “What am I saying? Who reunites like this? Let’s give it another go, ready?”

“Elizabeth, I missed you so much. Come here.” He stood up and pulled her into him, feeling the soft powder on his cheek. “I can’t tell you how happy I am to see you again, Princess. I thought I never would. Most of the time I thought you weren’t even real.”

She reached into her bag and pulled out a scrap of paper and a pencil, wrote on it and handed it to him.

“And all yours, mon capitan.”