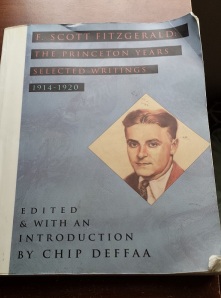 Wandering around the stacks the other day, looking for research material to use for my next novel I stumbled on this book which I didn’t know existed. I’ve read a number of Fitzgerald’s early pieces but this book, F. Scott Fitzgerald: The Princeton Years Selected Writings 1914-1920, has a bunch I’ve never seen before. Edited and introduced by Chip Deffaa and published in 1996, it contains 74 pieces by Fitzgerald, all originally published in Princeton periodicals The Tiger or The Nassau Lit.

While fascinating to Fitzgerald aficionados, this book is most likely going to be boring to anyone else. At Fitzgerald’s my favorite writer of all time, however, I much enjoyed this look at work from his college days.

Unsurprisingly, the quality of the work varies but the unique voice he would come to be known for is evident in a number of the pieces. The type of work also varies and includes poems, fiction, book reviews, parodies, plays, and even an original Princeton fight song.

While some of the works are all but nonsense to those of us who didn’t go to Princeton, there are a number of strong pieces, most of which would find their way in one form or another into his other works. These include:

A strong piece that was never published, The Pierian Springs and the Last Straw, is probably my favorite in the collection. It tells the tale of a successful but drunken author who believes that a mistake he has made with a girl many years before has forever ruined him forever.