This is the first part of a twelve-part story called Ten at the Trio. It takes place in and around the Chicago area in the Spring of 2000. It is dedicated to everyone I have ever gone to an Alkaline Trio show with. 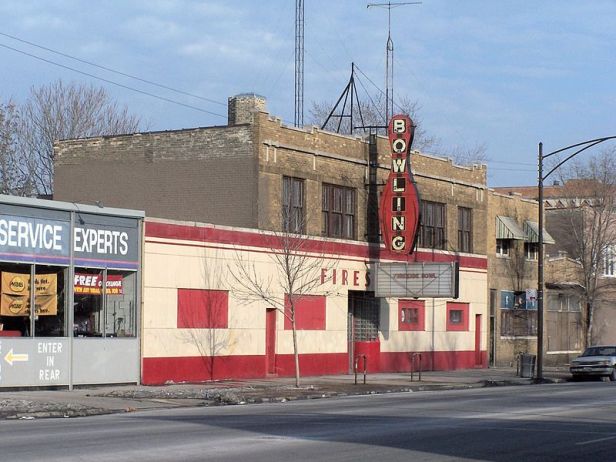 With increasing hours of sunlight in the evening, but many weeks to go before the longest day of the year, Chicagoans were fully mired in the first warm day of the new millennium. One of the few transitional days between suffocating winter and sweltering summer, the breath and pulse of the city (cooler by the lake) reverberated through each of its residents even though piles of snow, avoided by students in shorts and flip-flops, stood on the corners as the city closed up the books on another nondescript workday. Construction teams clad in fluorescent yellow and orange diverted traffic for projects that no one was able to say when they began and no one in their right mind believed would ever end; the Cubs were in fifth place, the Sox were in first; homeless who had survived the brutal winter sought help through a variety of increasingly creative means, such as the gentleman at the Jackson L stop who dressed and performed as Michael Jackson, spoken of in glowing, albeit often derisively, terms by his moniker “Jackson on Jackson”; the beaches stood full of exposed skin and had the faint scent of coconut that still lingered on bathing suits that had been in drawers and closets since last summer; Michigan Avenue teemed with tourists armed with fistfuls of credit cards and unslakeable desire; the young and desperate to get ahead remained in offices with their higher-ups who had no families or anywhere to go, offering an unspoken and unheeded warning of things to come, and resulting in the pockets of lights in the skyscrapers that would dot the land once the sun receded; Millennium Park sat unfinished, not opening until years later; dogs, ecstatic to see their owner return home, were even more eager to have a pee; children sat down expectantly to dinner tables.

Down at 2648 W. Fullerton, the Fireside Bowl, worn and showing its 60 years of age, having hosted teenagers on their first dates who were now grandparents, readied itself for another show.

“Hey, great shirt,” Martin said, pointing to the boy who was seated alone at the far end of the long table in the dining hall.

“Thanks,” the boy replied. Unprepared for conversation he followed with a safe and obvious question, “Yeah, you like the Trio?”

“Haven’t taken Goddamnit out of my car since I bought it. I’m Martin.”

“Good to meet you man, it cool if I sit down?” Martin said, gesturing toward the seat with his red plastic tray that was piled high.

“Sure. Actually I’m glad. I don’t know a single person here. I was starting to think coming here was a terrible idea. I’ve never even been north of the Mason-Dixon line before.”

“You kidding? You never been to The City?”

“Only got here yesterday…this orientation shit is weird, isn’t it? Stupid icebreakers and shit, and then when my roommate showed up late last night we went walking and a raccoon jumped out of a trash can and scared the crap out of me.”

Martin laughed. “Were you there for the hypnotist? I don’t know if I believe it but I nearly pissed myself laughing. ‘Stand up for yourself poindexter!’ Classic. I had a meeting this morning where we were sitting in a circle and were supposed to tell some random fact about ourselves and this one girl said, ‘I have a really long blonde hair growing out of my nipple.’ Seriously, that’s what she said. For the next four years whenever I see her all I’ll be able to see is a giant nipple hair.”

“But seriously,” Martin continued, “this is where you wanna be. There’s so many shows. You seen the Trio before?”

“Shit. Next time they’re playing we’re there. Last time I saw ’em was at Reckless. You been there yet?”

“All I’ve seen is campus and my parent’s hotel.”

“Tomorrow night, taking off right after the last of the mandatory crap.”

“Shit, well look,” Martin said, shoveling a spoonful of elbow pasta into his mouth, “come back in the fall and I’ll show you around. Too bad you’re not here for the rest of the summer.”

“Am I a Cubs fan? First game I ever went to my Dad got us seats in the bleachers and Ryno hit two out. It was incredible. You?”

“I was raised by Harry Carey and Steve Stone – WGN was one of the only channels that came in clear. I’d watch the news every day – I guess that’s kinda the reason I ended up here. Watching the city like that, as far back as I can remember I wanted to move here.”

“Right on. Where’d you say you were from?”

That was nearly a year ago now. Freshman year passed in a drunken blur. Martin’s roommate, a fervent Republican who mid-way through the year came out of the closet, and Arthur’s roommate, a white kid from the Atlanta suburbs who thought himself an inner-city black kid and always called it “Hot-lanta,” were a constant source of amusement, as were their various foibles with girls, and that time they cut class, got drunk and broke into the radio station to play Alkaline Trio’s Hell Yes single. But now, with the semester winding down and everyone stressed over upcoming finals, the two of them, along with a handful of other cohorts who had made it this far, jumped on the L and headed down to Fullerton.

End of Part One

One thought on “Ten at the Trio: A Love Letter to music, friendship and Chicago in 12 parts”