This is the eighty-second of 87 letters exchanged during World War II between Nicholas Salvatore and Elizabeth Galloway. For more see Nicholas and Elizabeth. 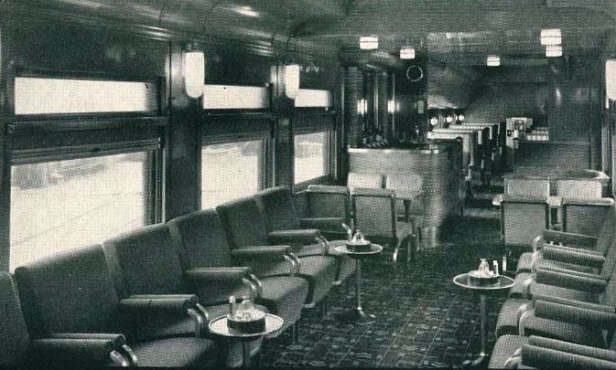 We’re on the train, currently stopped somewhere in Indiana for some unclear reason. There’s a muddy pool beside the tracks and a duck’s bathing in it. There aren’t any others in view. I wonder if she feels alone. I don’t think so. She seems so happy splashing in the puddle. It made me think of you in the rain, getting purposely lost. You did, didn’t you? Not the first time, but after that, right?

We passed through Chicago as the sun was rising. I was so afraid I would miss it that I barely slept. My mother promised to wake me but I didn’t want to take the chance.

I don’t regret it. My body is heavy and sleepy, but my mind is racing. There was a heavy fog as we pulled in, but by the time we left it had passed enough to get a clear view of the skyline. Thinking of the millions of people there waking up, the city waking up, it made all my fears go away. And thinking that one of those people is your father and another is your grandmother and so many other are ones you’ve known and spent time with – it makes me feel closer to you than ever.

I may be able to sleep now, at least I’ll give it a try. When I wake up I want to see New York, shining and wonderful and waiting for my return. I can’t wait for this whole ordeal to finally come to an end.

I love you Nick.