This is the thirty-fifth of 87 letters exchanged during World War II between Nicholas Salvatore and Elizabeth Galloway. For more see Nicholas and Elizabeth. 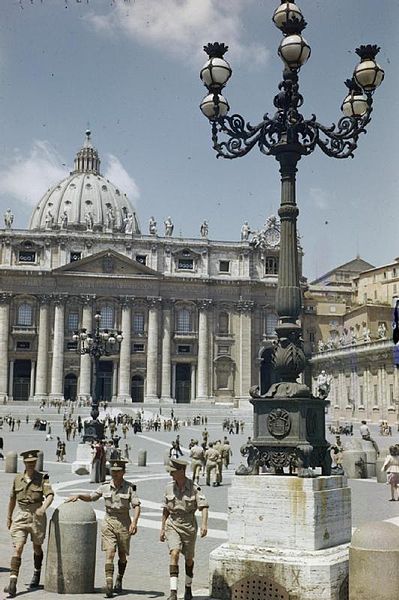 On my first real furlough. It’s beautiful here and steeped in the history of centuries but the people have so little. The Germans took everything from them. It makes my upbringing look privileged. I have never seen people more grateful for some bread. We gave chocolate and gum to the children and their faces lit up. Some of the locals brought us wine they had managed to keep hidden in the hills – it was rich and intoxicating in more ways than you can imagine and the best I’ve ever had, with the exception of what my family used to make, of course.

I’m sitting in the afternoon sunshine watching the city go about her day, slowly rebuilding. Even after everything she refused to bow down and her people are free again. And I feel whole for the first time since coming over. After the war we’ll sit together in the sun and let the summer hours pass over us. There won’t be anything we have to do. Just be together.

Got a letter from my father the other day – the Cubs are in last place. Ah well, at this rate looks like we’ll have to wait ’till next year. Pop said he figures they’re waiting until I get back so I can be a part of it. That’s nice of them, isn’t it?