This is the thirty-third of 87 letters exchanged during World War II between Nicholas Salvatore and Elizabeth Galloway. For more see Nicholas and Elizabeth. 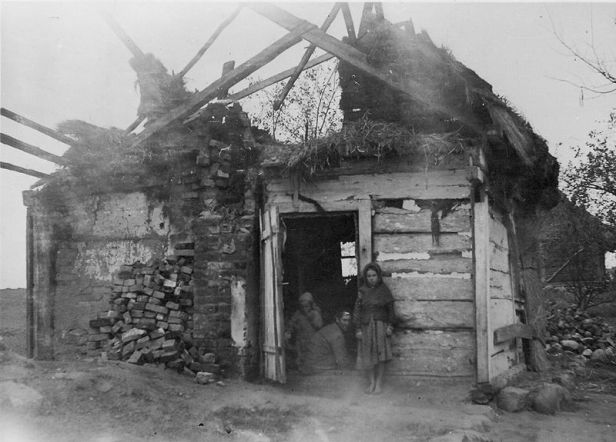 It’s been some week. Let me give you the Reader’s Digest version –

It was during a huge storm, dense fog. Me and another man lost our unit. He was picked off by a sniper. Sniper, hell, in that fog it had to have just been a random lucky shot. Could’ve been Hiawatha for all I know. Anyway, I came to a farm house that had been bombed. I knocked and showed them the red crosses on my sleeve. Two women and two kids – a boy and a girl. I thought it was three women, but later I found out she was only 14. The way she was banged up who could tell? She was the only one who spoke any English, learned it for her trade – servicing men from both sides. I did what I could to clean her up. She was still pretty, but ravished. I couldn’t tell her she probably wouldn’t live the year. So there I was for the night. Somewhere they had gotten a Monopoly game. Can you believe that? So we played – me, a 14-year-old prostitute, her kid brother and two widows. One of the widows beat us all, ha. I think she scammed me, but she did let me keep Illinois Avenue. When I first saw it I cried and when I left she gave it to me, having no idea why it meant anything. It’s safely tucked away next to your picture.

You know, I just realized I never did get the girls name. Isn’t that funny?

In regards to your letter to your aunt, I think it’s a great idea. All three of you deserve to be happy and if you could be happy together all the better. Relationships like that take time to repair though. I hope your aunt and mom are both willing to open their hearts to the idea. Otherwise you’re gonna have a tough road ahead. Keep at it, you’ll get out of there sooner or later.