As I walked to the store I smiled at the storefronts, the sun, the history of the streets I was walking through. My father’s parents spent some 50 years in this neighborhood. What was once nearly all Czechoslovakian has since become nearly all Hispanic, but that is simply the way of things in places like Cicero. The streets are the same, most of the buildings are the same, and so are the people – they have the same wants and desires as any other immigrant culture. I was here once again and I was happy to walk in the footsteps of my family. The way back from the store, however, was a different story. I wanted to call my dad to tell him all about it and for a moment forgot that he was dead. I began crying . “Home” is such a funny concept.

Trip so far in numbers:

After two and a half days in North Carolina, I left Greensboro early the morning of April 11 for a long train ride to Baltimore. My seatmate was unresponsive to conversation, or much of anything else. As far as I could tell she didn’t leave her seat for the 9 hour ride or ever put down the schedule she had in her hand. Fair enough. That gave me plenty of time to write, leading me to finish writing out the last portion of the first complete rough draft of my novel. (I have to handwrite everything first, then type it up). I was overjoyed and starred out the window grinning wildly. 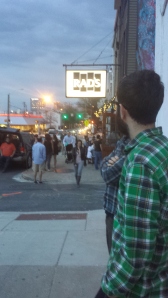 Arriving at Baltimore’s Penn Station around 6 pm I stepped out into the end of the workday crowd and cherry blossoms in full bloom. Beauty and joy aplenty. Staying once more with old college friends I had cat sat for a month earlier (which inspired the short story The Accidental Cat Sitter), I felt as ease in familiar surroundings. We immediately went from the station to an art show for the graduating students at MICA, which was interesting but lack of much food led me to be focused more on the hunger drive. We ended up at Johnny Rad’s, a neat little place, where I ate way too many french fries. Tired and disoriented, I was ready for kitties and bed.

The following day is a bit of a blur, but I know there was a hike through some beautiful woods and a trip to Ellicot City, where I had my first ever iced coffee. (Yes, I’m 31, and yes, the jury is still out on how I feel about the iced coffee).

If nothing else happened during this trip to the area, we were determined to return to the student cafeteria at American University in DC, where we all met and shared our hopes, dreams, desires and hangovers. TDR (the Terrace Dining Room) is an amazing place. While the aftermath was occasionally destructive, the time in the place itself were often a highlight of my day. If I lived close and had money I’d be there at least once a week. Always plenty of veggie and vegan options, they now added a gluten-free section. Forget that, if I was nearby I’d sign up for a class just so I could buy a meal plan so I could eat there every day. 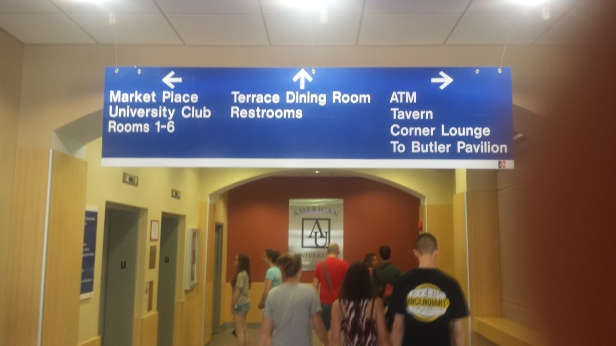 Eating ourselves silly, we watched the undergrads, searching for TDR crushes and our younger self doppelgangers. (I found mine. He kept appearing everywhere we went. Godspeed, young Greg. You have so much to learn and it’s not gonna be pretty). Meandering up the steps we made our way out to the quad, where the sun was shining, the theory of inverse clothing relations was in full play, and I was truly content and happy. (Post-TDR stomach issues not withstanding).

My desire for a nap was cut short as we needed to get back for a sailing adventure my friend was a part of. I contemplated not going due to exhaustion, but he convinced me to. Picturing sitting on a boat, gently sailing around the harbor, I agreed and pulled myself off the couch. Then reality emerged: a 22 foot sailboat that we would all be crewmembers on. Immediately beset by fear, my flight response kicked in and I was

ready to take off. Again, my friend convinced me to go and I’m glad I did. My first sailing adventure was a hoot. I was certainly wide awake after that. This trip has been in many ways about overcoming fear. No in regards to anything specific, just fear in general. I’ve let it control my actions nearly my entire life and I’m tired of it. And so I put it aside and went and had a great time. Hizzah.

The next day was a lazy morning followed by a trip to my friend’s mom’s house in New Jersey for Passover dinner. Having been raised Roman Catholic and since becoming a Buddhist, I knew nothing of the rituals or what to expect. What I got was tons of delicious food, a new culture experience, an overall great time, and more happily inebriated than I’ve been in years. So a success in my book.

I’m now in Chicago and will be here until May 5. The 18 hour train adventure from Baltimore is not one I wish to recall as it was just long and uninteresting. Eventually I have to randomly sit by an attractive and intelligent woman, right? Instead I get an inappropriate 20-something guy who divorced his wife because she had a drug problem. Classy move.

But nevermind that nonsense, Chicago awaits.